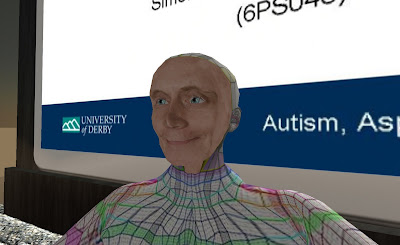 Following on from my thoughts about academic avatars I recently decided to spend some valuable personal time on a little experiment. It's turned into yet another project (sighs). I'm interested in creating avatars that not only resemble their owners but in fact are exact replications of their owners. I mean, going beyond the 'out of the box' SL avatars, and indeed beyond so-called 'photo realistic' skins, to photographic replications and anatomical recreations of avatar owners. This means transposing digital images into second life and mapping them onto the avatar framework as skins as well as taking accurate measurements of the physical body to transpose to the avatar. This process of recreation rather than simulation is actually much harder than it seems and somewhat of an art. The result is a realistic (if not spooky) likeness that seems short in comparison to everyone else in Second Life, most avatars being well over the equivalent of 7-foot tall in Second Life (as well as idyllically super-toned, muscular and attractive).

There are one or two services within SL that offer the photographic replication but these are very poor quality and fail to capture the essence of the user. I'll post more details on this as the project develops. The initial results are a little bit freakish and remind me of the film 'AI'. At the very least when I've perfected this technique my students should be able to recognise me properly, rather than having to make the contextual-based leap of similarity with my real self. More pictures to follow as time allows.