The human body is obsolete

I've been interested in the futurist performance art of Stelarc (born. Stelios Arcadiou) for a while now. He worked at Nottingham Trent University, which is just down the road from Derby University. His performance art opens up questions that, I believe, traditional Science cannot yet approach. In this sense, Art is leading enquiry, which is nothing new of course. However, Stelarc pushes the boundaries as far as we can follow. His work heavily embraces the concept that the human body is obsolete (biologically inadequate), in this way he looks towards a time where biology is replaced with technology, or perhaps that they are in fact the same thing. In his words, "It is time to question whether a bipedal, breathing body with binocular vision and a 1400cc brain is an adequate biological form.". 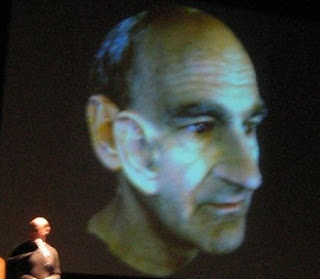 As complex biological machines Stelarc's performances challenge notions of identity, psyche, decency, physical augmentation, cyberpscyhology, transhumanism and much more. The work is often profoundly disturbing, but I think important as a tool to push forward ways in which we might consider a virtual or technology-enhanced existence. The performances are often linked to hardware merged with his body and controlled from the web. From a third robot hand, a suspension from hooks, a cell-grown ear grafted to his arm or inside the body sculptures, the work is shocking and though provoking. Psychologically these body-technology mash-ups are confusing. Philosophically they are intriguing. How far can we replace the physical body with technology before it no longer can be though of as human? 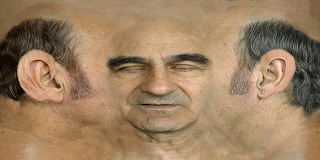 Thinking machines and technology-enhanced bodies are the realm of the futurist and traditional thinkers are very resistant to these attempts at provoking thought. For psychologists using virtual worlds the opportunity of opening up these conceptual spaces into interactive virtual environments is now with us. A first foray into virtual 3D space often sees newbies play with the physical appearance of their human-like avatars (no one chooses the Furry avatar option anymore!) and experiencing the associated change in thoughts and behaviour that produces. Nevertheless, in the virtual world we have the opportunity to go even further than Stelarc’s performance art and utilise the space experimentally to open up Psychological questions yet unaddressed.

If you’re interested in these ideas I’d urge you to first check out his ‘Movatar’ project, where the possibility of AI-controlled virtual avatars controlling real-life bodies becomes a distinct reality through advance technology. The video below is a good introduction to Stelarc's output. Please note, the video shows scenes of human suspension art and as such might be unsuitable if you have a weak stomach.