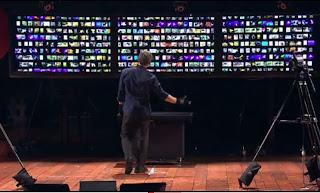 The next big leap in human-computer interface was demonstrated recently by John Underkoffler at his TED talk in February. He was one of the science advisers for the Steven Spielberg science-fiction film "Minority Report". Underkoffler suggests that in five years this technology will be built in to new computers as standard. I hope so. The demonstration is breathtaking.

How long after that can we expect this to be integrated with a virtual word or proprietary virtual reality cave? The implications for immersion into the virtual world are profound.

You can view the Spatial operating environment here http://www.huffingtonpost.com/2010/06/15/john-underkoffler-ted-tal_n_612842.html